(NEW YORK) – December 11, 2018 -On Sunday, CNN honored its Top 10 “Heroes” during a gala that was broadcast live from the American Museum of Natural History in New York.

Dr. Robert J. Gore — an emergency physician at Kings County Hospital in Brooklyn and founder of KAVI (“Kings Against Violence Initiative“) — was among the Heroes recognized for their work to improve the quality of life for people in their communities.

Although he did not win “CNN Hero of the Year” (that honor went to Dr. Ricardo Pun-Chong), Dr. Gore was celebrated with a video tribute, presented by actor Omari Hardwick, that highlighted the efforts of KAVI to heal the violence among inner-city youth.

“CNN Heroes” celebrates “everyday people changing the world,” each of whom shows how one person can truly make a difference. Top 10 CNN Hero nominees receive a $10,000 grant, while the “Hero of the Year” wins $100,000 toward their work.

KAVI, a Brooklyn-based non-profit founded by Dr. Gore in 2009, offers youth-focused intervention programs in schools, hospitals and the community that teach productive and safe alternatives to interpersonal violence.

Subaru is a proud supporter of CNN Heroes and will match funds if KAVI raises $50K by January 2, 2019. To donate, visit kavibrooklyn.org. 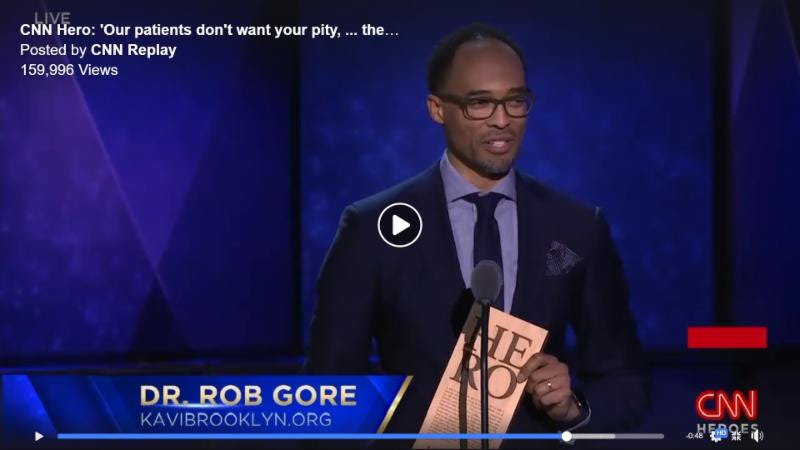 Dr. Gore is an attending physician and clinical assistant professor at Kings County Hospital – SUNY Downstate Department of Emergency Medicine in Brooklyn, NY. He is the founder and executive director of KAVI (Kings Against Violence Initiative), a hospital, school and community-based youth violence intervention prevention and empowerment program targeting teens and young adults that have been injured as a result of violence or at risk for violent and recurrent violent injury. Dr. Gore is the founder and director of the Minority Medical Student Emergency Medicine (MMSEM) Summer Fellowship, which is a mentoring and enrichment program for underrepresented minorities interested in Emergency Medicine with a focus on project development.

Since 2008 he has been working as a consultant for Clinique Espérance et Vie in Terrier Rouge (Northern Haiti) and working towards establishing a regional health care system in the northern part of Haiti. He is on the advisory board for EMEDEX International, a non-profit organization dedicated to the global promotion and advancement of emergency medicine, disaster management and public health.

Born in Buffalo, NY but raised in Brooklyn, Dr. Gore has lectured around the U.S, the Caribbean, South America and Asia and has worked in East Africa, Haiti and South America.  He is a graduate of both Morehouse College in Atlanta, GA and SUNY Buffalo School of Medicine and completed his residency in Emergency Medicine at Cook County Hospital in Chicago.

Dr. Gore is a 2018 Top 10 “CNN Hero,” a global honor that celebrates “everyday people changing the world.” In 2016, he was selected as a resident in TED’s inaugural TED Residency program and delivered a TED Talk that year on inner-city violence. He has been featured in the New York Times, the History Channel’s “History Now” series, TheRoot.com, Black Enterprise, BET, The Grio and more.