Home Lifestyle Food and Drink KAZAN Restaurant Is Open for Business During COVID-19 with Delivery or Pick-Up
prev next
Food and Drink
April 13, 2020 RGN staff 0

Gifted Chef and Entrepreneur, Ryu Isobe, can taste his food in his imagination before it even touches the boiling pot. We had a chance to chat with Ryu and hear his journey.

Kazan opened its doors to amazing success in late 2019, largely due to its Chef and owner Ryu Isobe, the brainchild of Tatsu Ramen restaurant on Melrose Avenue and Sawtelle Blvd, who moved on from Tatsu, is now doing his own signature style. The focus is on homemade Japanese style Soba Noodles. At Kazan, everything is homemade fresh daily. Touted as serving the best Soba Noodles in Los Angeles, one try, and you too will know why. Soba noodle has a history of around 1,300 years in Japan, while Ramen only has 90 years. The current trend in Japan is different types of high-end handmade Soba noodles. The first noodle restaurant in the world that received a Michelin star was also a Soba restaurant.  There are many excellent ramen spots in West Hollywood and Beverly Hills, good soba, is far tougher to come across – and that’s exactly why Los Angeles is so excited about Kazan.

As a self-taught Chef, Ryu has spent more than half of his life in the US, so he understands both Japanese and American culture. He came to The United States when he was 14 with dreams of one day starting his own restaurant. Ryu did a lot of research before even getting close to fulfilling his dream. Graduating from the University of Southern California, USC, with a major in Business Entrepreneurship, Ryu has always had a passion for the Japanese food culture, especially for noodles. He started Tatsu Ramen as his first venture to great success.

Ryu has a photographic memory for creating his incredible dishes. He is one step ahead of the game, after opening up the premier ramen noodle restaurant Tatsu Ramen, he saw a trend of Ramen being overpopulated and wanted to introduce Los Angeles to the traditional Soba Noodle phenomenon.

However, Soba isn’t just a simple dipping noodle. Soba has many different styles. The imagination is the main ingredient of the Soba. “I have no boundaries as a chef”, Ryu explains, “I didn’t get any training from actual chefs, I just get the ingredients, taste it and imagination is the biggest ingredient of my food”. He purchased a state of the art noodle machine; he explored all kinds of flours, different ratios of the water and salt, and a variety of other ingredients. “That’s how I came up with my noodles, also I really wanted to make this kind of mixed noodle, which no one is doing”. Ryu makes 3 types of noodles: the first one is very thin, the second one is a mixed medium size, and the third one is a very thick Soba noodle. Ryu uses a customized blade to create the different thickness of his delectable noodles.

About the Food at Kazan: Typical Ramen style is called Tonkotsu Ramen. It has a cloudy rich pork broth made of pork bones. Kazan on the other hand serves the clear chicken broth, which is cooked for seven hours and vegan broth, which takes 24 hours to make. At Kazan, Chef Ryu utilizes traditional Japanese and French techniques to make his own perfect clear broth.

For starters, you have a nice selection of menu items at Kazan; Lotus Root Chips and Edamame, which goes great with beer; Teriyaki Chicken Leg, served with mixed greens; Shishito Peppers, which are fried and drizzled in a sweet miso dressing; Organic Salad, served with spring mix, cherry tomatoes, bell peppers and tossed in a homemade sesame dressing; Crispy Won tons, stuffed with shrimp and pork; and finally delicious Shrimp Tempura served with a spicy mayo sauce.

Kazan’s specials include; Lamb Chops, with freshly sourced from New Zealand, and grilled in a spicy Japanese sauce. A-5 Wagyu Rib Eye, an imported Japanese Wagyu Beef Carpaccio topped with chives, fresh ginger, and homemade citrusy yuzu-soy sauce. It is prepared by cooking at a very high heat then adding in the combination of multiple oils.

Beverages include an exclusive private selection of Chardonnays and Cabernets from Kazan’s neighbor, the famous sushi restaurant Matsuhisa. These wines are from Sonoma County, and Kazan is the only restaurant that carries Chef Nobu Matsuhisa’s wine outside of Nobu restaurants.

Matsuhisa’s royalty is part of the Kazan brand, due to Junko Matsuhisa being Ryu’s silent partner, daughter of Nobu Matsuhisa, and the general manager at Nobu Tokyo. You can enjoy Kazan’s spicy food with a Sapporo Draft, Asahi Draft, Coedo Craft Pilsner, and Hefeweizen beer. A nice array of Sake: Winter Warrior, and Junmai Ginjo Premium also is a great pairing with Kazan’s superb food. There is also a variety of soft drinks and a volcanic bottled water.

Thinking of innovative interior designs with his friend, Ryu came up with the idea of using a design called “Dazzle”. This term originally comes from a style of camouflage frequently used on Naval ships during WWI. It consisted of a series of complex patterns and shapes in an array of contrasting colors, making it difficult for the enemy to estimate the ship’s exact position and direction.

Ryu chose to design his restaurant in this way because he wanted to have this feeling of Dazzle, that Kazan restaurant is unpredictable. “Maybe we serve noodle, or Wagyu right now, but I’m a freestyle chef, so I’m going to introduce maybe tacos or something in near future”. Ryu says. The word “Kazan” means volcanic in Japanese. Ryu says, “I named this restaurant Kazan because there are many Ramen restaurants in LA, and once a volcano erupts it destroys everything around it and creates new nature, creating a new wave of Japanese food”.

Kazan’s many signature spicy dishes, and magic ingredients, will make mini explosions in your mouth. The flavors truly ignite your taste buds, as a symphony of notes you never could imagine tasting. Kazan is one of the Seven Wonders in the culinary world, you have to try all of this glorious goodness – from the new kid on the block.

Kazan Restaurant is taking orders. (Pick-Up and Delivery )- Grubhub – have been put in place for all of its customers. 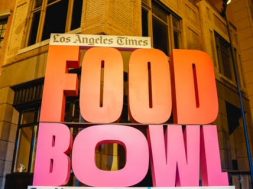 A FEAST TO BEHOLD AT THE LA TIMES FOOD BOWL

ARE YOU READY FOR A NEW THAI FOOD EXPERIENCE?