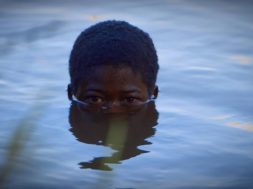 POV, the longest-running independent documentary showcase on American television and produced by American Documentary, will highlight Caribbean narratives told from the female perspective in their current Season 34 program.

The two multi-award-winning titles, Landfall by Cecilia Aldarondo and Stateless by Michèle Stephenson, offer nuanced investigations into tandem social, political, and economic conflicts currently at play on the Caribbean island nations of Puerto Rico and the Dominican Republic, respectively. The documentaries, rendered by female directors and with majority female casts and crews, provide deeply necessary looks into a region not always comprehensively represented by and within the mainstream media.

An official selection of the Tribeca Film Festival and winner of the Viewfinders Grand Jury at 2020 DOC NYC, Landfall is Aldarondo’s second documentary film to broadcast on POV after her season 30 title, Memories of a Penitent Heart. Offering a prismatic portrait of collective trauma and resistance and set against the backdrop of the 2019 protests in the wake of Hurricane María in Puerto Rico that toppled the governor, the film assembles scenes from all over Puerto Rico, spotlighting the different ways each community addresses its own recovery. Aldarondo was also a 2021 Independent Spirit Award “Truer than Fiction” nominee. The award recognizes outstanding emerging talent in nonfiction film direction.

Landfall speaks to the often competing visions of post-María Puerto Rico’s future. Foregrounding the 72-billion-dollar debt crisis that predated the storm and worsened its impact, Aldarondo’s film explores the intertwining legacies of colonialism, exploitative industries and disaster capitalism and the barriers to recovery they create. As opportunists looking to make a profit descend upon the island, the Puerto Rican diaspora comes together to create unprecedented forms of community-led mutual aid when assistance from the federal government and traditional NGOs fails to appear.

“As a Puerto Rican from the diaspora, I watched Hurricane María unfold from afar while cut off from loved ones, including my grandmother who would die six months after the storm. Reeling from the debt crisis, which unleashed a wave of austerity, poverty and migration that María only intensified, the Puerto Rico depicted in Landfall is a laboratory for greed, privatization, gentrification, the dismantling of social services, and the devastating effects of climate change,” said director Cecilia Aldarondo.

She continued, “We may have a new President and Puerto Rico a new governor, but little has changed since María hit, as evidenced by the recent privatization of Puerto Rico’s electric grid. The Puerto Rican people are still fighting to end the profit-driven policies that have proved disastrous ever since President Obama signed them into existence. In Landfall I wanted to balance a cautionary tale for our times, while also prioritizing a dignified image of Puerto Ricans who have banded together to fight for their sovereignty.”

While the future remains uncertain, Aldarondo captures the communal power of people fighting for autonomy over their lives. In posing the question of how we move forward in the wake of disaster, the celebratory mood in the streets offers the beginnings of an answer, one emerging from a growing demand for self-determination and a collective spirit.

“Cecilia’s masterpiece is both a sharp condemnation of the continued colonial exploitation of Puerto Rico and a warm embrace of the land and people. Rendered with a singular vision and deep affection, you’ll be swept into solidarity with these Puerto Ricans who resist and rebuild,” said Chris White, executive producer, POV.

Turning its sights 381 kilometers to the west of Puerto Rico to the island of Hispaniola, home to both the Dominican Republic and Haiti, Michèle Stephenson’s Stateless examines the complex racial histories and contemporary politics of the neighboring nations. Sharing one border and a single island, Stephenson takes a deep dive into a sociopolitical crisis that has deep roots in both the island’s history of slavery and dictatorship.

Providing sociopolitical insights that are at once deeply personal and powerfully far-reaching, Stateless reveals the depths of racial hatred and institutionalized oppression dividing two nations tasked with sharing one small island at a moment when the Dominican Republic is raising funds to build a border wall, echoing recent policies in the United States.

The film’s historical foundation rests on the 1937 extermination of tens of thousands of Haitians and Dominicans of Haitian descent by the Dominican army, an action realized due to anti-black hatred itself perpetuated and fomented by the Dominican government. Fast-forward to 2013 and the Dominican Republic’s Supreme Court has stripped the citizenship of anyone with Haitian parents, retroactive to 1929, effectively rendering more than 200,000 people stateless.

Addressing these historical markers head-on, Stephenson’s documentary centers Rosa Iris and her campaign as she challenges electoral corruption and fights to protect the right to citizenship for all people. Topics of nationalism, naturalization, birthright citizenship, and the racial implications of government record-keeping take center stage.

Filmed with a chiaroscuro effect and richly imbued with elements of magical realism, the Rada Studio production Stateless combines gritty hidden-camera footage with the legend of a young woman fleeing brutal violence to flip the narrative axis, exposing the magnitude and pervasiveness of racially- informed government discrimination and the inescapable, bureaucratic practices meant to keep Dominican nationalist, and anti-black, policies in place. Told completely from female perspectives on both sides of the conflict, Stephenson prioritizes the role of women in processes of nation-making, storytelling, and enculturation, or the transmission between generations of notions of self in relation to shared group histories.

In a historic moment, POV is returning to PBS in July with a slate of films that reaffirm public media’s vital role in sparking national dialogue and featuring seven powerful and critically-acclaimed Latin American and Latinx-focused documentaries, making up more than half of this year’s lineup and co-presented with Latino Public Broadcasting. Out of the thirteen titles programmed for Season 34, the majority are by Latin American or U.S. Latinx filmmakers, marking a monumental milestone for Latinx narrative representation on PBS and public television more broadly.