“MOULIN ROUGE! THE MUSICAL” A SMORGASBORD FEAST FOR THE SENSES 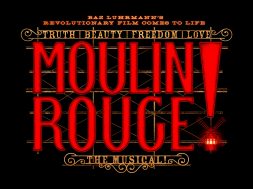 “MOULIN ROUGE! THE MUSICAL” A SMORGASBORD FEAST FOR THE SENSES

Then enter the iconic Pantages Theatre in Hollywood, the perfect setting for this, exciting, exhilarating, and enchanting musical play. Pop the champagne, lift up your glasses, and toast the Bohemian life.

For many Baz Luhrmann’s Moulin Rouge is embedded in the mind of movie lovers as one of Hollywood’s most iconic films. With an outstanding cast featuring Nicole Kidman and Ewan McGregor and a set design that took one’s breath away. Released in the early 2000s it was nominated for a remarkable 129 awards winning two Academy Awards, three Golden Globes, and one BAFTA.

The story centers around Christian, a young poet, and talented songwriter who has come to Paris in 1900 to pursue a career and become a member of the Bohemian movement. Christian ends up falling hopelessly in love with Satine, the star of the famous Moulin Rouge. However, Satine has already been promised to the unscrupulous Duke. A love triangle ensues. As Christian and Satine try to stay together against all odds, they are led down a dark and dangerous path, but Satine is holding a terrible secret of her own.

Now in 2022 Moulin Rouge! The Musical directed by Tony Award winning Director Alex Timbers delivers electrifying, energetic, dazzling performances and choreography that will leave you fully satisfied in every way.  Some may say there were not much originals songs in this production that linger in your mind. But with over 70 top hits of the last century weaving into this story of love, passion, ambition, power, and sacrifice you don’t need anything else.

Tony Award winning Director Alex Timbers said, “I’m thrilled and honored to welcome an
extraordinary and vibrant group of actors to Moulin Rouge!”. And of course along with superb directing, such exquisite performances cannot be accomplished without the expertise of lighting, set design, costume,hair, makeup design, sound design, and choreography. Together all these elements give us a scintillating visual feast that will always be remembered by so many theatre lovers.

The Moulin Rouge of Paris, managed by Jean-Jacques Clerico (CEO), is a dazzling and
spectacular universe, the symbol of the Parisian way of celebrating since 1889. Starting life
as a popular cabaret and dance hall, the venue became an iconic music hall in the Roaring
Twenties, and then a theatre where numerous famous French and international artists
stepped out into the limelight. Today, the Moulin Rouge and its 60 artists present the Féerie
revue show: two hours of amazement between cabaret and music hall styles where dance
scenes and surprise acts intersperse – without forgetting the Moulin Rouge’s most
emblematic dance, the French Cancan! Since its creation, the Moulin Rouge of Paris has
always been an invitation to live and share all the emotions and effervescence of a unique
party extravaganza. http://www.moulinrouge.fr/
The Grammy-nominated Moulin Rouge! The Musical Original Broadway Cast Recording,
produced by Baz Luhrmann, Justin Levine, Matt Stine & Alex Timbers, is now available
by Baz Luhrmann’s label, House of Iona, and RCA Records. The album debuted at #1 on
Billboard’s Cast Album chart.
MAC is the Official Makeup Partner and Preciosa is the Official Crystal Partner of Moulin
Rouge! The Musical.

Parental Advisory: Children ages 12 and up. All patrons must have a ticket, regardless of age.

Runtime: 2 hours and 45 minutes including intermission