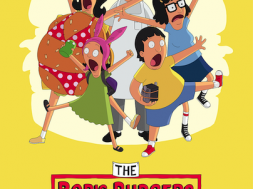 20TH CENTURY STUDIOS’ “THE BOB’S BURGERS MOVIE” TO DEBUT JULY 12 ON HULU IN THE U.S., AND COMING SOON TO STAR+ IN LATIN AMERICA AND DISNEY+ UNDER THE STAR BANNER IN ALL OTHER TERRITORIES

20th Century Studios’ “The Bob’s Burgers Movie” will debut July 12 on Hulu in the U.S. and coming soon to Star+ in Latin America and Disney+ under the Star banner in all other territories on:

July 13 in Europe, the Middle East, and Africa (except Poland)

Loren Bouchard, the film’s director/screenwriter/producer said, “We’re so happy that the fans have been able to find us and watch us and binge us as much as they want on Hulu. Our fantasy is that we have to send over a new copy of Bob’s movie to Hulu because their copy gets all worn out from people watching it so much.”

Labeled “Certified Fresh” by Rotten Tomatoes, “The Bob’s Burgers Movie” has been praised as “hilarious,” (Ross Bonaime, Collider) and “consistently funny and proudly weird” and “one of the most joyful films of the year.” (Brandon Zachary, CBR)

A full scene from the film featuring the song, “Sunny Side Up Summer,” is now available.

“The Bob’s Burgers Movie” is just one of the blockbuster films streaming as part of Hulu’s “Get the Big Screen on Your Screen” summer film campaign, which also includes highly anticipated premieres of “The Princess,” “Not Okay,” “Prey” and many more.

About “The Bob’s Burgers Movie”

“The Bob’s Burgers Movie” is an animated, big-screen, musical comedy-mystery-adventure based on the long-running Emmy®-winning series. The story begins when a ruptured water main creates an enormous sinkhole right in front of Bob’s Burgers, blocking the entrance indefinitely and ruining the Belchers’ plans for a successful summer. While Bob and Linda struggle to keep the business afloat, the kids try to solve a mystery that could save their family’s restaurant. As the dangers mount, these underdogs help each other find hope and fight to get back behind the counter, where they belong.

Fans can pre-order the vinyl set to release on December 16, 2022, today HERE.