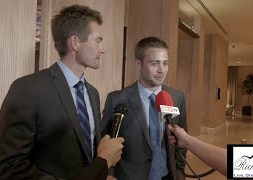 Tyrese Gibson and Michelle Rodriguez paid tribute to their co-star Paul Walker from the  Fast and Furious Franchise at The Noble Awards.

The 3rd Annual Noble Awards, which honors outstanding charities†and†celebrity†activism¨†brought together Hollywood’s leaders for an emotional evening to raise awareness and remembrance around the philanthropic work of the entertainment community. The Noble Awards not only put the stars on the red carpet but also featured Host AnnaLynne McCord anchored the show which featured trophies created by patients of Children’s Hospital Los Angeles.

The kid creators of the awards also served as co-presenters at The Noble Awards to personally share their work with celebrity recipients The Artists Program at Children’s Hospital Los Angeles helps alleviate anxiety, provide psychological support and promote self-expression in sick and injured children through art, dance, drama, music, and expressive arts therapies facilitated by certified art therapists. Other partners include social enterprise, Philanthropy, who provided a wardrobe to Nikki Reed and guests.