For the second week in a row, the top three films have maintained their placement.

However, this week a new film has broken into the #4 spot. Taking that fourth place is an Alberta Ferretti film helmed by Luigi & Iango that intrigued viewers with it’s dark and mysterious star, Polish model Malgosia Bela, orginal music score by David Chalmin, and classic Italian art.

In other news, Prada and Gucci’s campaign films are on their way down, making way for Buyma’s “A Kind Drone” and Niclas Larsson’s “Magic Diner” to rise up. 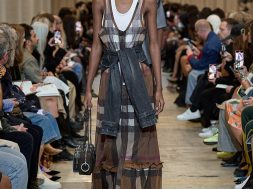 BURBERRY 2023 COLLECTION IS INSPIRED BY THE BEACH