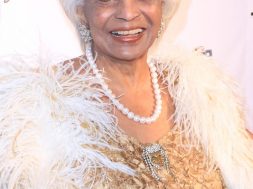 Legendary Icon, Nichelle Nichols celebrated her 85th Birthday on Thursday, December 28, 2017.  A favorite actress of fans worldwide, and a trailblazer for women to be considered for substantial positions in the aerospace industry through NASA, she also opened the doors for many women, as a whole, and especially women of color for acting roles of a significant position versus simply a housewife, maid or secretary.

Ms. Nichols, who is a frequent guest at conventions and events across the globe, travels extensively and enjoys meeting the fans.  Private, intimate birthday parties are usually the norm for Nichols, who decided to include 35 lucky fans in on the festivities this year to mark the milestone birthday. VIP packages included dinner, birthday cake, and a champagne toast, plus a Meet & Greet, autographs, and photos with the birthday girl, all part of her amazing party.  The birthday dinner party was held at La Piazza Restaurant at The Grove in Los Angeles, announced Gilbert Bell, of GB Entertainment, Ms. Nichols’ manager.