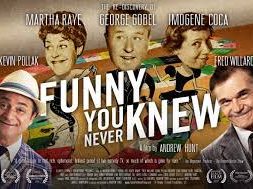 Funny You Never Knew is a feature documentary that follows comedians Fred Willard and Kevin Pollak as they re-discover a trio of comedians from the 1950s: Imogene Coca, George Gobel, and Martha Raye– three remarkable performers whose groundbreaking comedy captured the American zeitgeist and influenced many of the major comedians that followed: from Bob Newhart, Lily Tomlin, and Carol Burnett to Jerry Seinfeld, Ellen DeGeneres, and Kristen Wiig.

Coca, Gobel, and Raye were household names during the Golden Age of American TV comedy– the 1950s. Their shows topped the ratings whilst they took home every major award from Emmys and Peabodys to Oscars.  Today, however, you might be hard put to find anyone who has heard of them. Director Andrew Hunt brings an unforgettable documentary that will be cherished by future generations.

” Funny You Never Know” will have its final screening on Wednesday, May 1st at 2:30 pm