“WE ALL THINK WE’RE SPECIAL” – ON DIGITAL NOW

“WE ALL THINK WE’RE SPECIAL” – ON DIGITAL NOW

Reviewed by Ishrat Jahaiara Quazi– “I’m King of the world,” repeats Charlie before falling flat on his back. “I’m lord of the sea!” says Ed while diving straight into a swimming pool. There’s slight music in the background, the volume is loud enough to distract you during conversations and at the same time, it’s so soft that you can’t make out the lyrics. The two characters who seem to be friends are chit-chatting while being completely drunk and the scene cuts off with Ed getting out of a hot tub to gather his clothes.

Kirby Voss’s We All Think We’re Special is a story about Charlie(Jared Bankens), an alcoholic who suffers from mental health issues, and Ed(William McGovern), the friend who just wants to help in any capacity.

The story continues at the start of Act 1, where both Charlie and Ed wake up from a night of partying. Ed is really hungover and Charlie seems to be unaffected from last night’s drinking, Charlie even offers Ed more drinks which he obviously refuses as he’s still trying to recover from the headache and hungover. This sort of shows that Charlie is used to drinking a lot and that’s probably the reason he isn’t that affected. Later that morning, presumably a lawyer, Duncan(Sophie Marie White), visits Charlie’s house to tell him that his mom didn’t really leave him the house and the people it’s left to are selling it. He doesn’t own the house and Duncan points out to Ed the harmful situation Charlie is in, apart from being in thousands of dollars of debt.

Ed, at this point, being the friend he is, is trying to help Charlie through this whole situation. There’s a scene where Charlie goes to shower and calls for help while Ed is trying to clean up the house and has this flashback to all the times they’ve been drinking. While the scenes flashed by quickly, you could see how within a matter of seconds things can spiral. Ed continues to clean the place and empty all the alcohol bottles which Charlie does not appreciate at all. He gets really mad and both of them get into this heated argument and start attacking each other’s choices in life. This particular scene becomes much more interesting when the film uses split screens and simultaneously switches between showing both characters opposite to each other and repeating. The fight doesn’t go much longer and it seems like Charlie sort of backed off from arguing with Ed. But, that doesn’t last long because soon enough Charlie starts to experience withdrawal symptoms from the lack of alcohol in his system. This triggers his anger towards Ed when he can’t find any drinks around the house. He then decides to go to the store to buy some cigarettes but realizes that Ed took apart the truck engine, so he can’t really go anymore. That doesn’t help Ed’s cause that much because that only fuels more anger from Charlie. It’s difficult helping anyone with addiction but it’s doubly hard when that is combined with mental issues. Both actors so in tune with their characters bring true authenticity to every scene

What unfolds next is Charlie having a hard time tolerating Ed. But Despite Charlie’s bad behavior, Ed continues to be a friend and attempts to keep Charlie away from drinking. In Charlie’s current state, he hurts Ed by using homophobic slurs during one of their arguments. It’s clear that going through withdrawal symptoms is emotionally stressful and physically exhausting for Charlie. And this film is such a clear and precise example of the fallout when others are attempting to help someone with an addiction. 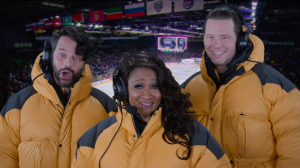 Though I may not have a lot of knowledge about the effects of alcohol addiction, this film has given me a stronger awareness of the toll that encapsulates everyone around the addicted. The fact that this film doesn’t romanticize or exploit mental health issues like a lot of recent movies and tv shows do leaves a stronger impact on the audience. It allows everyone to decide whether what Ed did was right or wrong but, the story shows you both narratives of what it’s like to be the one suffering and what it’s like to watch someone you love go through this horrible experience.

This movie is hard to sit through. It’s not fun and there are zero comedic scenes. It’s just straightforward which is a good thing. Because writers Felicia Stallard and Kirby Voss didn’t take advantage of the issue talked about in the movie, it leaves an impression on the viewer. It’s kind of brilliant when you think about how this film mostly consists of two actors. Bankens and McGovern have such great chemistry, not to mention the acting is top-notch. Both actors are so in tune with their characters and bring true authenticity to every scene you’re bound to be invested in them if you stay through just the first 15 minutes of the movie.

Apart from the acting, the use of split screens and random flashes of 3-second scenes during the 3 acts really helped engage the viewer visually. In this case, the viewer being me. I don’t know why I’m writing from a third-person point of view. The movie is long but during the 90 minutes, I don’t think there were particularly any scenes that were a waste. I really enjoyed watching this film and I think people should at least give it a try. Though I have to warn you again that it’s not amusing at all. But you will come away with an awareness that will stay with you for a long time.