Available On Demand and DVD

Reviewed by Me’Chele Sevanesian: Released by DARK STAR PICTURES comes ANKLE BITERS, a new horror-comedy in the tradition of MOM & DAD and THE HUNT, On-Demand and DVD and Co-written by Canadian filmmaker and written Bennet De Brabandere)and story by Zion Forrest Lee and Bennett.

“Ankle Biters” revolves around Sean(played by Zion Forest Lee) a pro hockey enforcer who has fallen in love with Laura, a widowed mother of four young daughters. When Laura’s children mistake an act of lovemaking as an attack, they plot to protect their mother at all costs and with horrific results. It’s understandable that children would have an adverse reaction but does that merit wanting Sean dead.

With many film subjects to write about, I can only deduce that the writers may have either experienced some deviant behavior as a child or had a stepfather who they hated with the passion so this might be viewed as therapy for them. Promoted as a dark comedy horror Ankle Biters attempts to add layers of gore, and frights with a few shocking scenes along the way.

The film opens with a hockey player getting into a physical altercation with a player on the opposing team. Our main character Sean Chase squeezes the opposing player’s eye out and the player dies, we then see his parents get his ashes in his hockey glove. Apparently, this is a flash-forward moment, so the audience is supposed to infer that everything which has preceded this event takes place after a certain point.

With this as the opening scene, the writer’s attempt to make Sean look like a good person but the intense goriness of it seems to suggest the aggression Sean is exhibiting would lead to a mental breakdown. But it could also mean maybe the children recognized this deviant behavior that their Mom is unaware of. By “the girls and mom” I mean Sean Chase’s new girlfriend Laura Haywood, who is a widowed mother of four little girls.

The girls essentially see Sean and Laura engaging in some pretty gruesome sexual activity and obviously because they are children they believe that their mother is in trouble and create this entire plan to kill Sean or hurt him. I want to point something out that did not sit right with me and that’s the idea of having four small children witness BDSM and that being the catalyst of a film. Personally, that made me feel very uneasy. Besides all the gruesome activity that exists in the movie, that idea is the core of the entire film and I don’t think that was on purpose. This concept especially reinforces the fact that I believe that somebody on this writing team really just had a traumatic childhood with a stepparent.

The writers also attempt to paint these four small girls as protecting their mom and that they don’t necessarily exhibit these murderous tendencies. There is a specific scene at the beginning where the sisters find a worm and as they watch the worm die the alpha sister makes very dark commentary on it. So that’s the one thing I didn’t appreciate,  if you’re going to say that the girls are protecting their mom but then also paint that they have this murderous side you’re going to lose your audience. Around 11 minutes into the film this really eerie music comes in but it doesn’t seem eerie in a high-quality way. It seems eerie in the default horror sound on a soundboard provided by iMovie.

As far as the writing goes I think that the storyline didn’t necessarily call for there to be these eloquent soliloquies, and high energy versus low energy, or even very traumatic experiences which call for overly dramatic acting. So I think that for the purpose of the story the script was what I expected it to be; very standard, very obvious, there isn’t much digging that the audience has to do in order to find themes or different aspects. 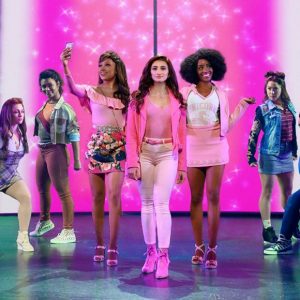 In regards to the cinematography, there are a lot of wide shots, there aren’t very many complicated shots to set the mood, it’s either a zoom shot of the person or thing that they want people to pay attention to or it’s a wide shot where everybody is the scene even if they’re not speaking is included. The only time there is even the slightest dynamic videography is at exactly 36 minutes when The family is at the lake and Sean decides that he’s going swimming. There’s this slow-down moment where the four girls are looking at Sean and the audience is supposed to see Sean the same way the girls do, like this creepy monster. There’s a lot of moving around as the music gets louder. It’s that same music I had mentioned before and the actor just does the worst impression of a dinosaur.

Around halfway or, a little more than halfway Sean and Laura go out for dinner as the four girls kidnap and essentially assault their babysitter for a reason that remains unclear. Because somehow the babysitter is connected to Sean and if they can get rid of the babysitter they’ll get to Sean. The babysitter has a crush on Sean and wants to get rid of their mother so she can get to Sean so they take that as a threat, as far as I understood.

I really just want to ask the writers how much they think a bunch of small children are capable of doing? Carrying a woman almost 3 times their size, tying her up with tape without her being able to fight back? I mean the premise would be funny but I don’t necessarily think that they’re fooling everybody even if it is supposed to be comedic it’s not realistic.

I haven’t really seen any other movies that I could compare this to. I think if you’ve seen the movie “Orphan” where a family adopts this young girl and she ends up being an adult,  they give me similar vibes but not necessarily the same. Obviously “Orphan” was a multi-million dollar production and was in the box office for a very long period of time, and the premise was also very different and done well (that is the only film I can think of). For these reasons, I am giving the film a 2 out of 10. I didn’t mind watching it but I didn’t like it. People who are willing to sit through a film and just watch it for what it is nothing more, nothing less, I’d recommend it for you.

Released by DARK STAR PICTURES comes ANKLE BITERS, a new horror-comedy in the tradition of MOM & DAD and THE HUNT, On-Demand, and DVD