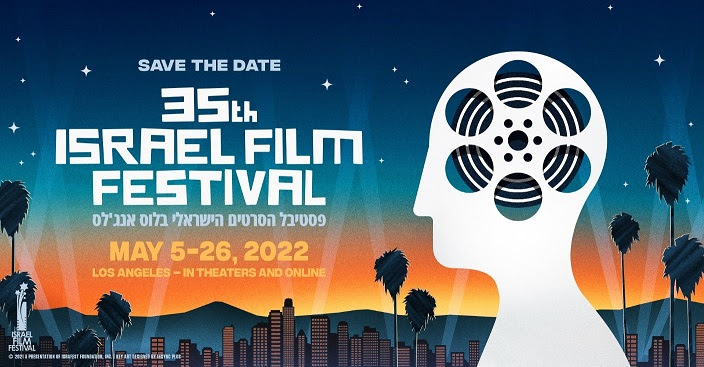 The 35th ISRAEL FILM FESTIVAL in Los Angeles, the largest showcase of Israeli cinema and television in North America, unspools this year both in theaters and virtually from May 5th – 26th.  The Festival’s Opening Night film on May 5th is director Avi Nesher’scritically acclaimed Image of Victory, nominated for 15 Ophir Awards; the evening also serves to celebrate Israel’s Independence Day.  With leading Israeli filmmakers and talent in attendance for post-screening Q&As, this year’s Festival will include five U.S. Premieres, six West Coast Premieres, and 14 Los Angeles Premieres among the 30 award-winning features, documentaries, and short films, announced Meir Fenigstein, founder and executive director of the ISRAEL FILM FESTIVAL in Los Angeles.

“I’m thrilled that the Israel Film Festival in Los Angeles is fully back for audiences to celebrate and support Israeli movies and their talented filmmakers.  We hope that this 35th edition will be a new, exciting beginning towards continuing to bring the very best of Israeli culture to Los Angeles,” noted Fenigstein.

The Opening Night film, the Los Angeles Premiere of the much-anticipated Image of Victory directed by Nesher, will take place on May 5th at the Saban Theatre (Beverly Hills).  All other Festival screenings will show at the Lumiere Cinema’s Music Hall Theater (Beverly Hills) and the Laemmle Town Center 5 (Encino).

Among the highlights of this year’s 35th ISRAEL FILM FESTIVAL in Los Angeles are:

Berenshtein – In this exciting journey into the depths of the soul, the last surviving member of the great partisans who located Hitler’s secret weapon, the V2 missile development facility, revisits his past as a soldier in World War II. By diving into his traumatic memories, he is forced to grapple with the dissociation and loss of identity that ensued after the war. Despite this adversity, it becomes clear that he is able to stay true to his values through it all. Based on the true story of Leonid Berenshtein.

Cinema Sabaya – This film follows nine women, Arab and Jewish, who take part in a video workshop hosted by a young film director who teaches them how to document their lives. With each raw homemade footage shot by the women and shared with the others, the group dynamic forces them to challenge their views and beliefs as they get to know each other and themselves better.

Greener Pastures – In this hilarious story, a cranky, retired widower who is low on money and begrudgingly resides in a nursing home, learns that many of his fellow nursing home residents are users of medical marijuana.  He soon embarks on a new business venture as a cannabis dealer. When his enterprise attracts the attention of both the police and a local street gang, he must decide whether he is willing to risk everything for what really matters most to him.

Here We Are – Winner of four Ophir Awards including Best Director, Actor, Supporting Actor, and Screenplay, this is the poignant story of a man who has devoted his life to raising his young adult autistic son. Together they live in a gentle routine, away from the real world until the son prepares to move into a specialized facility to start to learn how to live life semi-independently. While on their way to this new home, the father decides to run away with his son and hits the road, knowing the son is not ready for this separation. Or is it, in fact, his father who is not ready?

Image of Victory – Considered Israel’s largest budget film to date, the film is inspired by true events in 1948. Hassanin, an Egyptian filmmaker, is tasked with documenting a raid on the isolated kibbutz Nitzanim. When the kibbutz learns of the impending army raid, Mira, a young but valiant mother, is forced to reckon with the true cost of war and make an impossible choice.

More Than I Deserve – An award-winning film filled with emotional depth, the story is about a young boy who asks his single mother, who resists religion, if he can join his classmates in preparing for their Bar Mitzvahs.  She refuses. A religious neighbor volunteers to help the kid and the two form a strong bond. Gradually the mother falls for him too but will their romance last?

Plan A – Based on actual events and set in Germany in 1945, the film centers on a Holocaust survivor who meets a group of Jewish vigilantes. Together they develop a plan to take monstrous revenge against the German people for the Holocaust: to poison the water system in Germany and kill six million Germans. The film is based on the book “Nakam” by Israeli historian Dina Porat.

Queen Shoshana – An acclaimed documentary about the legendary life story of Shoshana Damari, the internationally known singing superstar who became an icon and a national treasure.

Saving Shuli – A record-breaking comedy at the Israel box office, the film is about three friends who go to Colombia to rescue one of their sons, who has been kidnapped by a drug kingpin.

Summer Nights – Winner of the Ophir Award for Best Documentary, this beautifully sensitive film offers a window into the world seen through the eyes of a six-year-old boy. It is a journey into the subconscious of an innocent and ingenious child as he falls asleep and drifts into the depths of his own mind.

HERE WE ARE | הנה אנחנו

The mission of the ISRAEL FILM FESTIVAL is to highlight Israel as the lively and innovative nation that it is, as well as to shine a spotlight on its thriving film and television industry and enrich the American experience of Israel’s social and cultural diversity. As an international entertainment industry event, the festival has brought acclaim to both the films and participants and has opened new possibilities for cooperation and co-production between the U.S. and Israeli film and TV industries. Each year, the festival explores Israeli society by premiering Israeli features, documentaries, and television dramas, and through conversations with visiting Israeli filmmakers. Since its inception thirty-five years ago, the festival has created an exciting and artistic platform for engaging diverse audiences with the richness of Israeli life and culture.  The co-chairs of the Festival are Michelle Sobrino-Stearns, CEO, Variety, and Stacey Farish, President, Deadline.   The Festival honorary chairman is Arnon Milchan, New Regency Productions.