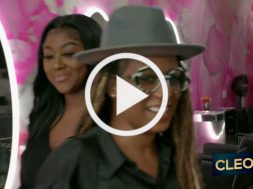 Dominique Calhoun Transforms A Dull Salon Suite Into A Pretty Girl Haven On the Premiere Episode of Decor Remixed Wednesday, April 6 At 9 P.M./8C

Decor Remixed follows interior designer Dominique Calhoun, principal at Remix Living, as she takes on clients who have yet to realize their space’s full potential. Her philosophy is to make “high impact design accessible to everyone” on a reasonable budget. In each episode, Dominique, along with her network of makers and artisans, gets creative to deliver a space beyond the clients’ wildest expectations. Based in Philadelphia, she adds a personal touch to each design job by incorporating custom pieces from the iconic city’s artisan community. No project is ever the same, but they will always find a way to accomplish their goals regardless of how impossible the project may seem.

SILVER SPRING, Md. (April 5, 2022) – CLEO TV’s new lifestyle series, Global Gourmet, premieres tomorrow night, April 6 at 9:30 p.m./8:30C. Hosted by the renowned Chef Essie Bartels, the show highlights the joys of delicious food and stories of wanderlust travel. In the premiere episode, Essie gives us a look and taste of some fabulous cuisine. She serves up Moroccan chicken in a tagine that looks amazing and tastes even better! Then, she slowly cooks peppered goat and serves it with a side of kelewele. For the recipe, click here.

Chef Essie is the person from whom you want to learn from in the kitchen and in life. She also shows a delicate balancing act as a creator, traveler, entrepreneur, and mogul on Global Gourmet. Her extensive travels across the globe have inspired colorful stories and the most incredible dishes bursting with flavor and passion. Growing up in Ghana, her mother’s tiny kitchen is where her love affair with spice ignited and it has now grown into an empire. Chef Essie believes that spice is the anchor to a great dish, taking viewers on a flavorful journey bringing West African cuisine to the world!

ABOUT TV ONE NETWORKS

TV One Networks is the hub of black culture and entertainment with a broad offering of original programming and classic series, serving both diverse audiences for TV One and CLEO TV. Launched in January 2004, TV One currently serves 43 million households, and CLEO TV, launched in January 2019, is the sister network with a 34.9 million household reach. Each network has a unique audience that serves viewers with fan favorites from TV One such as Unsung, Uncensored, Fatal Attraction, ATL Homicide, Life therapy, Don’t Waste Your Pretty, and Urban One Honors. While CLEO TV, a lifestyle and entertainment network targeting Millennial and Gen X women of color, delivers content that uplifts and inspires today’s, modern-day women. Viewers of CLEO TV can expect award-winning content in both original and acquired series including Culture Kitchen, Living by Design, New Soul Kitchen, Just Eats with Chef JJ, Tia Mowry’s Quick Fix, and All Things Adrienne House to Home. Both networks are solely owned by Urban One, Inc., formerly known as Radio One, Inc. [NASDAQ: UONE and UONEK, www.urban1.com], the largest African-American-owned and operated multi-media company.