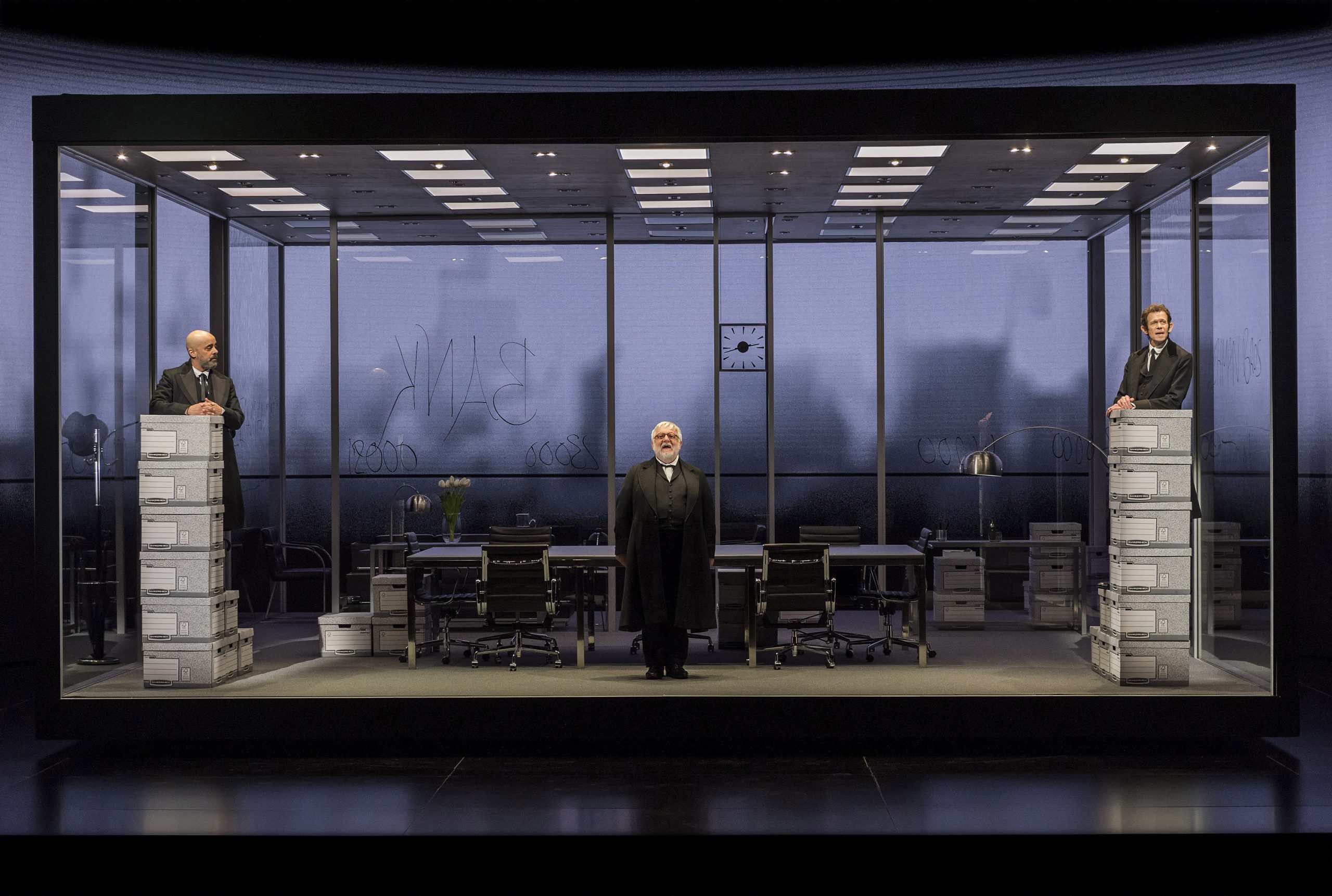 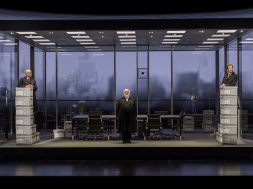 “The Lehman Trilogy” has been hailed by The New York Times as “a genuinely epic production” with “superb” performances by Russell Beale and Godley. Howard W. Overshown joins the cast having understudied the role of Emmanuel Lehman on Broadway.

On a cold September morning in 1844, a young man from Bavaria stands on a New York dockside dreaming of a new life in the new world. He is soon joined by his two brothers, and an American epic begins. 163 years later, the firm they establish — Lehman Brothers — spectacularly collapses into bankruptcy, triggering the largest financial crisis in history. It is the story of a family — and a family business — that would transform and, finally, upend the world.

The world premiere of Stefano Massini’s “The Lehman Trilogy” opened at the Piccolo Teatro in Milan in 2015. It turned out to be Artistic Director Luca Ronconi’s final production before his death. A long-term admirer of Ronconi’s, Sam Mendes was inspired to begin planning an English adaptation for Neal Street Productions.

Ben Power was commissioned by Neal Street Productions to create a new version of this epic play, using a literal English translation by Mirella Cheeseman. This production opened at the National Theatre on July 4, 2018, before its North American premiere at the Park Avenue Armory where it garnered huge critical acclaim. The New York Times called it a “magnificent play… [a] genuinely epic production out of London, directed with surging sweep and fine-tooled precision by Sam Mendes…with a design team that understands the value of simplicity in doing justice to complex matters.”

“The Lehman Trilogy” subsequently opened on May 11, 2019, for a 16-week sold-out West End run at the Piccadilly Theatre. Following Broadway’s 18-month shutdown, “The Lehman Trilogy” has returned to Broadway — where it had previously played four performances in March 2020 — and recently finished its run at the Nederlander Theatre for a limited engagement on January 2, 2022.

Stefano Massini’s work has been translated into 22 languages and performed around the world. His plays have been directed by Luca Ronconi, Lluìs Pasqual, Arnaud Meunier, Irina Brook, Anton Kouznetsov, Declan Donnellan, Marius von Mayenburg, Stephan Bachmann and Sam Mendes. In 2015 he became the artistic consultant at Piccolo Teatro di Milano/Teatro d’Europa. Stefano Massini is the author of many novels and essays and contributes regularly to the Italian newspaper La Repubblica. In film, he has collaborated with production companies such as Fandango and Cattleya. He appears weekly on the Italian talk show “Piazzapulita” on La7.

The National Theatre and Neal Street Productions’ “The Lehman Trilogy” is presented in Los Angeles at the Ahmanson Theatre by Center Theatre Group.

Tickets, starting at $35, for “The Lehman Trilogy” are available through CenterTheatreGroup.org, Audience Services at (213) 972-4400, or in person at the Center Theatre Group Box Office (at the Ahmanson Theatre at The Music Center, 135 N. Grand Avenue in Downtown L.A. 90012).

The National Theatre’s mission is to make world-class theatre, for everyone. The NT creates and shares unforgettable stories with audiences across the UK and around the world. On its own stages, on tour, in schools, on cinema screens, and streaming at home, it strives to be accessible, inclusive, and sustainable. The National Theatre empowers artists and craftspeople to make world-leading work, investing in talent and developing new productions with a wide range of theatre companies at its New Work Department. Our nation thrives on fresh talent and new ideas, so the National Theatre works with young people and teachers right across the UK through performance, writing, and technical programs to ignite the creativity of the next generation. Together with communities, the NT creates ambitious works of participatory theatre in deep partnerships that unite theatres and local organizations — showing that nothing brings us together like theatre. The National Theatre needs your support to shape a bright, creative future. For more information, please visit nationaltheatre.org.uk. The National Theatre is an Arts Council England National Portfolio Organisation. For social media: @NationalTheatre @LehmanTrilogyUS.

Neal Street Productions is one of the UK’s most respected production companies, producing film, television, and theatre. Set up in 2003 by Sam Mendes, Pippa Harris, and Caro Newling, the company celebrated its 10th Anniversary in 2013, as Nicolas Brown was appointed to the Board of Directors. In 2015 Neal Street moved under the umbrella of the parent company, All3Media. All3Media is owned jointly between Discovery Communications and Liberty Global. Neal Street Productions makes distinctive, popular award-winning projects on both sides of the Atlantic. Most recent theatre productions include “The Ferryman” by Jez Butterworth, “Local Hero” by Mark Knopfler & David Greig. www.nealstreetproductions.com.

Center Theatre Group, one of the nation’s preeminent arts and cultural organizations, is Los Angeles’ leading nonprofit theatre company, which, under the leadership of Managing Director / CEO Meghan Pressman and Producing Director Douglas C. Baker, programs seasons at the 736-seat Mark Taper Forum and 1,600 to 2,100-seat Ahmanson Theatre at The Music Center in Downtown Los Angeles, and the 317-seat Kirk Douglas Theatre in Culver City. In addition to presenting and producing the broadest range of theatrical entertainment in the country, Center Theatre Group is one of the nation’s leading producers of ambitious new works through commissions and world premiere productions and a leader in interactive community engagement and education programs that reach across generations, demographics, and circumstance to serve Los Angeles.

American Express is the official credit card for Center Theatre Group and the presenting sponsor of the Digital Stage.

Center Theatre Group will continue working closely with The Music Center and L.A. County officials to ensure they are following all applicable health and safety protocols. More information regarding safety updates as well as audience vaccination, testing, and mask requirements is available at CenterTheatreGroup.org/Safety.