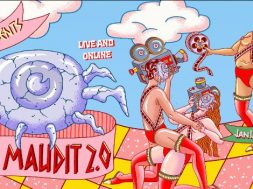 The fourth edition of Film Maudit 2.0, a showcase and celebration of outré films, takes place in person at Highways Performance Space and online @ watch.filmmaudit.org, beginning January 12 and now extended through February 11, 2023.

This year, Film Maudit 2.0 will once again feature over 100 works of cinema from 25+ countries including films rarely, if ever, seen in festivals: works addressing socio-political issues and taboo subject matter that challenges conventional artistic assumptions and sexual mores.  The wide range of shorts, narrative, documentary, and experimental films selected are deliberately bold, extreme, confrontational, and unusual.

With its hybrid physical and virtual format, Film Maudit 2.0 is moving forward into the exciting future of the festival-going experience, breaking down an exclusivity that has previously marred the indie landscape and its films/filmmakers, while at the same time allowing the participation and conversation of filmmakers across time-zones who wouldn’t have the ability to travel to festivals. This dual power of both a theatrical experience and a streaming landscape for independent filmmakers allows local audiences back to experience the richness of the live filmgoing experience with films that typically would not screen locally in such a context, while at the same time, making most of the films accessible to a wider national and international audiences in an online portal @ watch.filmmaudit.org.

Saturday, Jan. 14
Retrospective of Izzy Lee’s short film works, including her most recent, with the Filmmaker in person.

A ubiquitous presence on the festival circuit for the past decade, writer/director Izzy Lee blends genre, humor, and commentary in a strange, unique stew that has led her to be named one of the A.V. Club’s 10 female filmmakers to hire (amongst other accolades). Her award-winning tales have screened at major international genre festivals such as Fantasia, Overlook, Morbido, FrightFest, Fantaspoa, Brooklyn Horror, Boston Sci-Fi, Boston Underground, Chattanooga, and more. In 2022, Lee earned Certificates of Completion from Sundance Collab’s Directing Television, Directing Actors, and Visual Storytelling courses, under Dan Attias, Tessa Blake, and Peter Markham.

Jan Soldat is a German filmmaker whose over 100 mostly documentary works to date deal with the depiction of diverse sexual practices and preferences. “Formally, my films have to do with closeness and distance. A scene from a distance has a certain dignity. It enables me to show the protagonists of my films as proud of themselves. If I did too much close-ups, it would be too much for the audience, especially in the painful moments. By trying to keep a distance, the viewer can enter the film without the desire to leave. In “Law and Order,” every scene is framed equally, which makes it more neutral, without the film saying one thing is more important than the other. As a viewer, you have more freedom to decide. That’s why I like it. My films are about authority, control, and power. It’s not just about dominance and submission, it’s also about being active and passive. These stories are very abstract in a way; they make what a power relationship is very obvious. Most people say their relationship is not about these things, but I think every relationship is. We have to confront them, call them out for what they are.” —Jan Soldat

“Far from making his films for shock value, Soldat is using the film medium to discover sexualities, relationships, bodies and passion in all of their forms—and in this way, to have another look at what it means to be human.” –IndieWire

The BEHOLD! Queer Film and Performance Series
Curated by Gina Young, Celeste Kamppila, Dino Dinco, and Juan Antonio Fernández featuring performances and multiple features and shorts programs that showcase works from and about the LGBTQ+ and Latinx communities spread over three curated categories.

ABOUT FILM MAUDIT 2.0
Inspired by French avant-garde filmmaker and writer Jean Cocteau who created the original Festival du Film Maudit (literally “cursed films”) in 1949 aiming to celebrate overlooked, shocking and experimental films.” Festival Artistic Director Patrick Kennelly says, “There is a connecting spirit to all of the works in Film Maudit 2.0, each selected to engage a different facet of the cinematic imagination. These radical “cinema-sations” are guaranteed to entertain, challenge the mind, and shock the senses.

ABOUT HIGHWAYS:
For 33 years, Highways Performance Space & Gallery has been one of Southern California’s most important non-profit alternative cultural centers, encouraging radical artists from diverse communities to develop and present innovative new work in various media. Described by the Los Angeles Times as “a hub of experimental theater, dance, solo drama and other multimedia performance,” Highways promotes the development of contemporary socially involved artists and art forms. Under the helm of Executive Director, Leo Garcia, Highways has received funding and support from organizations such as The Perenchio Foundation, The James Irvine Foundation, Metabolic Studio, California Community Foundation, Liberty Hill Foundation, National Endowment for the Arts, and The Roy Cockrum Foundation