Whitney Houston: I Wanna Dance With Somebody in Theaters Now 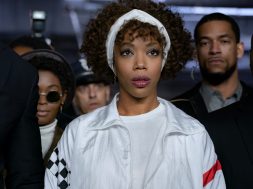 Whitney Houston: I Wanna Dance With Somebody in Theaters Now

Whitney Houston: I Wanna Dance with Somebody is a powerful and triumphant celebration of the incomparable Whitney Houston. Directed by Kasi Lemmons, written by Academy Award® nominee Anthony McCarten, produced by legendary music executive Clive Davis and starring BAFTA Award® winner Naomi Ackie, the film is a no-holds-barred portrait of the complex and multifaceted woman behind The Voice. From New Jersey choir girl to one of the best-selling and most awarded recording artists of all time, audiences are taken on an inspirational, poignant— and so emotional—journey through Houston’s trailblazing life and career, with show-stopping performances and a soundtrack of the icon’s most beloved hits as you’ve never heard them before. Don’t you wanna dance?

“Whitney Houston was probably the greatest contemporary female musical artist of all time,” says Clive Davis, who should know. The 90-year-old record executive, who has played an integral role in the careers of such luminaries as Janis Joplin, Bruce Springsteen, Sly and the Family Stone, Billy Joel, Chicago, Pink Floyd, and countless others, puts Houston in the highest echelon – and says that’s why her music continues to stay with us. “Her ability to do up-tempo, coupled with the versatility of incredible music voice control power on the ballads, made her the ultimate pop singer, the ultimate R&B singer. That’s why she stood out in all those years, and why we will be remembering her.”

Audiences will have the chance to remember and relive Houston and her incredible Voice in theaters with the release of Whitney Houston: I Wanna Dance with Somebody, the music biopic that will provide Whitney fans with previously unknown insight into the icon’s life and work. It is both a celebration of the triumphs of her life and a clear-eyed look at the tragedies that took her from us far too soon.

tags: I Wanna Dance With Somebody Whitney Houston
0