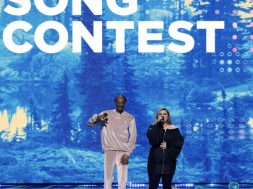 From the producers of “Eurovision Song Contest” and “The Voice,” the all-live music competition series, hosted by Snoop Dogg and Kelly Clarkson, with the Grand Final scheduled for May 9.

“American Song Contest” features live new music performances – representing all 50 states, five U.S. territories, and our nation’s capital – competing to win the country’s vote for the best hit song. An incredible solo artist, duo, or a band will represent each location and perform a new original song, celebrating the depth and variety of different styles and genres across America. The live competition consists of three rounds as the artists compete in a series of Qualifying Rounds, followed by the Semi-Finals and the ultimate Grand Final where one state or territory will emerge victorious.

Fans at home can vote for their favorite performances on nbc.com/ascvote,the NBC App and TikTok.  Voting for the Semi-Finals will open Monday nights and will close Tuesday morning.